The Geography of High-Poverty Neighborhoods – The View from Ohio

EIG recently released two reports as part of its Neighborhood Poverty Project, which examines the evolution of community-level poverty across metropolitan America over nearly four decades.

The first, entitled The Expanded Geography of High-Poverty Neighborhoods, found that the number of neighborhoods across the United States with a high poverty rate (30 percent or higher) has doubled since 1980.

This analysis will take a closer look at the high-poverty neighborhoods in Ohio’s largest urban areas. Ohio has arguably suffered more than any other state from the economic decline of blue-collar jobs over the past 50 years. Ohio is home to more legacy cities than any other state, and its urban areas have largely failed to experience trends in revitalization compared to other cities that have successfully attracted many highly-educated, highly-paid residents.

For the purposes of this analysis, I examined all of the neighborhoods located in the eight counties that contain the core city of each of Ohio’s largest metropolitan areas, as well as 5.5 million Ohioans, or 47 percent of the state’s population.

I looked at these neighborhoods through the same lens that EIG used in the Neighborhood Poverty Project:

I also used the same basic definitions that EIG used in the Neighborhood Poverty Project:

All of these neighborhoods are located in or near the downtown core of these three cities and include notable places like Tremont (Cleveland), the Short North (Columbus), and Mount Auburn (Cincinnati).

Twenty-two thousand Ohioans – 0.4 percent of the population of these eight counties – live in these turnaround neighborhoods. 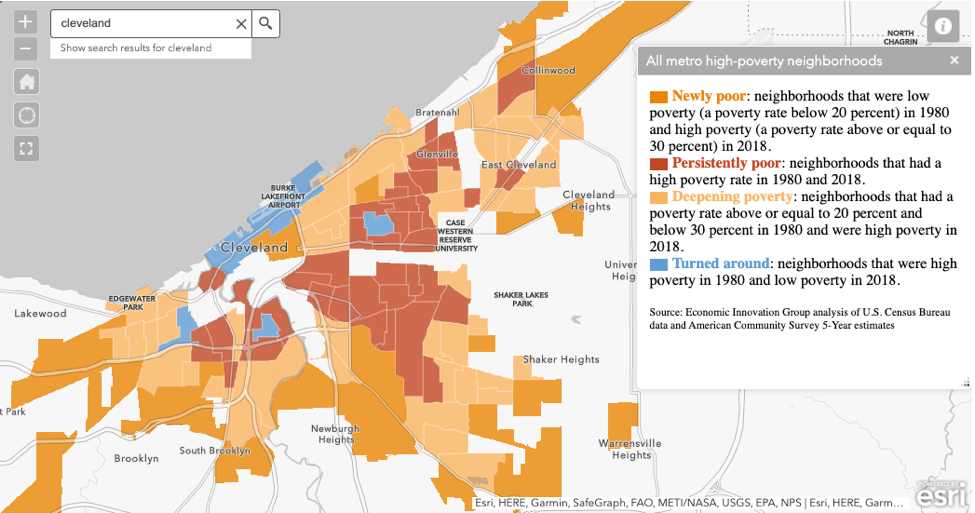 Sixteen percent of the population of these eight counties – 878,000 Ohioans – live in these high poverty neighborhoods.

The next three findings explore the state’s high-poverty neighborhoods across the three groups enumerated above: the newly poor, the persistently poor, and those experiencing deepening poverty.

Finding #3:  For every neighborhood that turned around, 15 went in the opposite direction

This analysis breaks out the change in white population over time because, historically throughout urban America, large declines in the white population have often resulted in disinvestment, disadvantage, and marginalization. Predominantly Black neighborhoods are hit especially hard by these dynamics and neighborhood poverty.

Eight percent of the population in these eight counties – 441,000 Ohioans – live in neighborhoods that have become newly poor.

The newly poor neighborhoods were solidly middle-class in 1980, and are located primarily either on the outer periphery of the eight central cities or are in inner-ring suburbs like Euclid, Garfield Heights, Maple Heights (Cleveland); Norwood (Cincinnati); and Kettering (Dayton). Finding #4:  Neighborhoods that were already threatened by high poverty declined even further

In these eight large urban counties, 104 neighborhoods experienced deepening poverty. These are places that were already fairly poor four decades ago and have gotten even poorer today.

Just over 4 percent of the population of these eight counties – 226,000 Ohioans – live in neighborhoods that experienced deepening poverty. These neighborhoods were working-class places in 1980 and are located within the central cities and some older inner-ring suburbs like East Cleveland and Garfield Heights. Finding #5:  Poverty in the oldest, predominantly Black neighborhoods closest to the urban core has been chronic and persistent – and is still getting worse

In these eight large urban counties, 111 neighborhoods have been persistently poor and remain enmired in chronic poverty.

Just under 4 percent of the population of these eight counties – 211,000 Ohioans – live in neighborhoods that have remained persistently poor. These neighborhoods are predominantly located in the core of the central cities, and nearly all were heavily majority-Black neighborhoods in 1980. Moreover, many were redlined in the 1930s and suffered from widespread disinvestment for generations. Finding #6:  Black households are most affected by neighborhood poverty

Black households are disproportionately likely to live in areas of high poverty compared to whites.

Across all 8 counties, Black residents were more than five times more likely to live in high poverty neighborhoods than white residents. Finding #7:  High-poverty neighborhoods have lost significant economic ground, and look increasingly less like the counties in which they are located

That 42 percent poverty rate is over two-and-a-half times what it is in these eight large urban counties as a whole (16 percent). What does this mean?

The trends in Ohio’s cities over the past four decades are unlike those frequently discussed in national press or urban punditry. Ohio has not witnessed sky-high urban housing prices, gentrification and displacement of low-income residents, or battles between NIMBYs and YIMBYs over single-family zoning.

Instead, we are seeing persistent suburban sprawl and urban disinvestment, vacancy, and abandonment, which has hit many predominantly-Black neighborhoods the hardest.

Persistent and worsening poverty in Ohio’s large urban areas is a function of both the state’s relative economic decline as well as an unhealthy set of dynamics within each urban area. All of Ohio’s large urban areas, with the exception of Columbus, have lost significant economic ground relative to their national peers since 1980 as a result of macroeconomic trends such as globalization and the transition from a blue-collar manufacturing-based economy to a white-collar service-based economy.

Not only has the gap between these regions grown, but the geography of the economic gaps within these regions looks different as well. The map of Cleveland below estimates household income by block and provides clear visual evidence of the huge gap in incomes between the central city and the outer suburbs.  The second expresses the same data at the same geographic scale in Washington, where there is far less of a gap between the central city and the outer suburbs and household incomes are much higher overall.

These macroeconomic national trends have been exacerbated by conditions within each metropolitan area.  The eight large counties, in the aggregate, have the exact same population that they did in 1980, yet all of them have seen widespread suburban development, even as nearly all of their core city populations have actually declined.

This pattern of disinvestment, abandonment, and outward growth is not just the result of the free market at work – it is aided by a wide array of public policies that help reinforce it, like transportation and economic development decisions. Even in a slow-growth, low traffic-congestion state like Ohio, billions of state and federal dollars have been spent on highway improvements to build job hubs in the outer suburbs, moving jobs and shopping opportunities further away from urban residents in cash-strapped cities. Meanwhile, these same residents have seen the infrastructure in their own neighborhoods crumble from neglect and disinvestment.

States would be well-advised to focus more of their efforts on place-based economic development that is not spatially-agnostic, and on transportation policies that support urban neighborhoods.  Combining these efforts with policies focused on boosting local entrepreneurship and small business development can help bridge social and economic gaps and, ultimately, help create more opportunity in the legacy cities of the Rust Belt and nationwide.