Rural America is not all Trump country: A closer look at the rural counties that Biden won In parts of the West, racial and ethnic diversity in some rural counties have given Biden a significant edge. In Arizona, he saw landslide victories in Apache County, which is 73.1 percent Native American, and Santa Cruz County, which is 83.5 percent Hispanic. However, Biden saw very few wins across an almost continuous band of rural counties that stretch from interior Washington through Oregon and down to Nevada, among which there is only one majority-minority county. 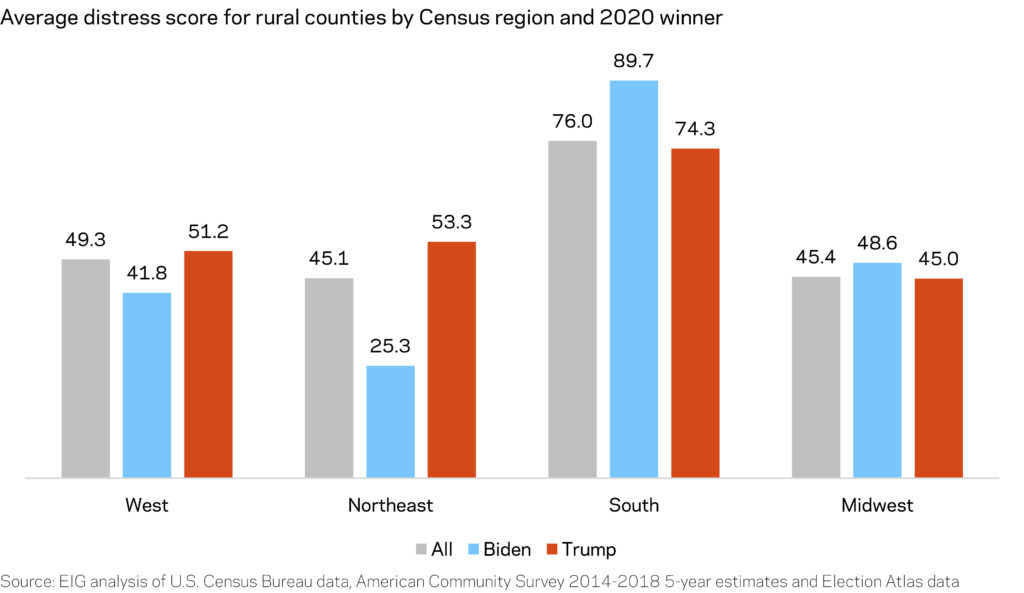 Recreation-focused rural counties leaned towards Biden, especially in the West

The share of workers employed in the leisure and hospitality sector is a powerful predictor of whether a rural county leans Democrat versus Republican. On average, over one-quarter of workers in rural counties that Biden won in the West were employed in the leisure and hospitality sector, compared to 14.9 percent for those won by Trump. A similar pattern is seen in the Midwest and the Northeast, but the relationship largely disappears in the rural South. Counties that Biden won in the West and Northeast are oftentimes counties that have seen above average population inflow. Population inflow is measured here as the share of a county’s population that consists of movers from out of state or abroad within the last year. This metric is especially relevant in the Northeast, where interstate migration is facilitated by the small size of the region’s states, and in the West where recreation-focused rural counties attract out-of-staters. Variations of this trend also play out amidst the vast sea of largely homogenous rural counties in the Midwest. In the South, where sprawling metropolitan areas are the in-migration magnets, rural counties typically face stagnant or declining population trends regardless of their political leanings. 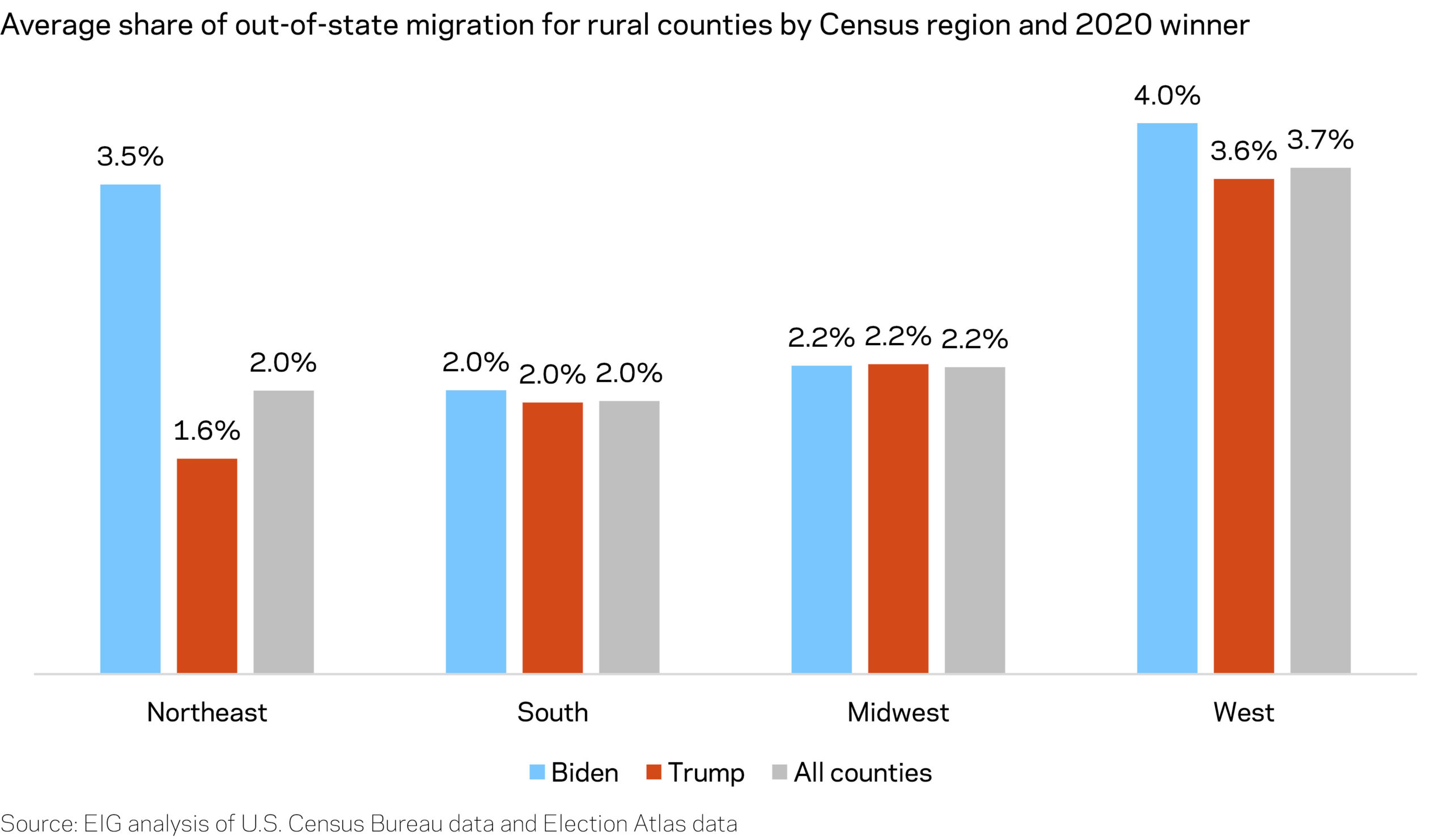 Across all regions, rural counties won by Biden had a higher share of newcomers from “blue” counties that voted for the Democratic presidential candidate in 2012 and 2016 than those won by Trump, 3 percent compared to 1.3 percent.

How These Trends Buoyed Biden in Wisconsin

Wisconsin represents the kind of rural patchwork where inroads are still possible for Democratic candidates despite steep losses in 2016 and meager gains in 2020. Biden carried six rural counties in Wisconsin, tied with South Dakota for the state that gave him the most ground in the rural Midwest. Unlike South Dakota, where the average non-white share of the population in rural counties won by Biden was 74 percent, race appeared less a factor in Wisconsin, where that share was 24.4 percent

Wisconsin provides evidence of how small demographic differences can change election outcomes in rural counties. Biden won back Sauk County, which had flipped to Trump in 2016 after going for Obama the previous two presidential elections, by a margin of around 600 votes. Coincidentally, that is almost the exact same number of new residents that moved to the county between 2014 and 2018 from deep blue neighboring Dane County (Madison), which Biden won by a landslide. Of course, not all those newcomers are necessarily Biden voters, but nonetheless it points to the importance of small margins in the 2020 election cycle.

Native Americans in Wisconsin also voted overwhelmingly for Biden, and were crucial for several of his wins in the state’s rural counties. Biden won 82 percent of the votes in Menominee County, which consists almost entirely of the Menominee Indian Reservation, and also won Bayfield and Ashland Counties, both of which have sizable Native American populations.

Even though many rural counties fit the farm belt stereotypes of being overwhelmingly white with very little population churn, the political map of rural America is much more differentiated in reality. Some rural counties are welcoming newcomers with very different voting patterns, who are looking beyond metropolitan areas for their new residency, a trend only likely to accelerate as more white collar Americans are working remotely. Still other rural counties are home to economically struggling communities of color, too often overlooked by policymakers, especially Hispanics and Native Americans in the West and the Midwest and Black Americans in the South. While there is no disputing that much of rural America is synonymous with Trump Country and will cast its votes accordingly (again, he won 90 percent of rural counties), an important minority of rural counties went their own way in the 2020 election and are ones to watch as rural America evolves, both economically and politically.

2 2020 election results are still being finalized, so the winner of some counties will likely change in the coming weeks as the remaining ballots are counted.