The Distressed Communities Index (DCI) is designed to provide a single, comparative measure of economic well-being across communities throughout the United States. It combines seven complementary economic indicators into a single summary statistic that conveys each community’s standing relative to its peers. The latest edition of the DCI is built from the U.S. Census Bureau’s American Community Survey (ACS) 5-Year Estimates covering the years 2016-2020 and the Census Bureau’s Business Patterns datasets for 2016 and 2020. 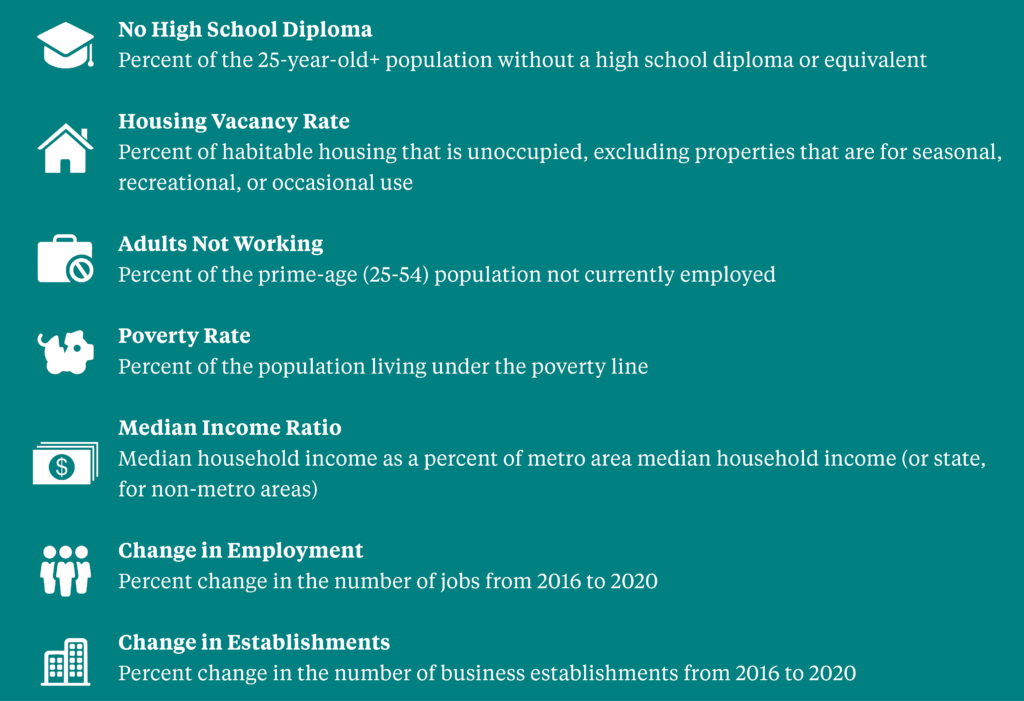 Each community’s score on the index is equivalent to its percentile rank across all seven measures combined. To calculate the index, each community is ranked on each measure. Then each community’s seven rankings are averaged and weighted equally to create a preliminary score, which is then normalized into a final score that ranges from approaching 0 (most prosperous) to 100 (most distressed). Communities are then sorted into five quintiles, or tiers, of economic well being: prosperous, comfortable, mid-tier, at risk, and distressed.

The same methodology is applied at every level of geography reported in the DCI and its related products. In all, the zip code-level DCI captures 99 percent of the U.S. population and all 26,000-plus zip codes with at least 500 residents not in dormitories, group quarters, the armed forces, or other similar arrangements. At a higher level of geography, it captures 3,134 counties or county equivalents with at least 500 residents.

DCI scores for the year 2000 were calculated in much the same manner using data from that year’s Decennial Census, as well as Business Patterns data for the years 1996 and 2000 to calculate change in employment and business establishments. The 2000 DCI was calculated against the country’s zip code map as it stood that year, and boundaries may have changed since then. There are 1,177 zip codes that appeared in the 2016-2020 vintage that lacked a score in the 2000 edition of the DCI, and there are 916 that appeared in the 2000 version but not in 2016-2020. Such entries and exits into the sample can happen due to the creation of new zip codes, consolidation of old ones, or population fluctuations around the 500-person minimum.

The 5-year American Community Survey (ACS) estimates are constructed from five years’ worth of data collection, reflecting the length of time required to compile enough data to provide meaningful and accurate estimates at fine geographic scales (such as zip codes) by the U.S. Census Bureau. The ACS supplies the majority of the variables that enter into the DCI, while Business Patterns data supplies the employment and establishment growth metrics. ACS variables should be interpreted as showing a measure’s estimated value when surveyed sometime between 2016 and 2020. All of the auxiliary data presented in the DCI suite of materials (e.g., racial and demographic information) come from ACS 5-year estimates.

Beginning in 2017, the Census Bureau completely excluded zip codes with fewer than three establishments from Business Patterns data. In instances where the establishment or employment estimates from Business Patterns were absent or suppressed by the Census Bureau in order to preserve privacy, the DCI defaulted to the next-highest level geography to produce a growth estimate that could enter into the index.

Some zip codes lacked ACS data for median household income (MHI) in 2016-2020. For several dozen, data was available at the census tract level. In these cases, tract-level MHI data for all tracts within or partially within the boundaries of the Zip Code Tabulation Area (ZCTA) was averaged to get an approximate MHI for the ZCTA.

This report uses the following metrics for characterizing counties along an urban-rural spectrum based criteria developed by the National Center for Education Statistics (NCES):

Exurban areas have a population smaller than 50,000, at least 25 percent of their population in a large or medium-sized suburb and must be in a metro with a population of 500,000 or higher.

Zip codes as presented and discussed here should be considered approximations of geographies and communities. Official zip codes represent postal routes defined by the U.S. Postal Service (USPS), not the U.S. Census Bureau, and their boundaries can and do change. The U.S. Census Bureau builds its own proprietary approximations of zip codes called Zip Code Tabulation Areas (ZCTAs) from census blocks once after each Decennial Census. The DCI joins data tabulated by both zip code and ZCTA based on matching codes, not necessarily coterminous boundaries. Two of the underlying variables (those from Business Patterns) are defined by zip code, and five (those from the American Community Survey) are defined by ZCTA. As such, it is important to interpret zip code-level findings in the DCI as general trends for an approximate area. In addition, Business Patterns data are subject to suppression and other methodological precautions to avoid disclosure of individual employers as well as errors that the Census Bureau does not go back to correct. Zip code boundary changes, suppressions, and errors may affect change-over-time calculations.

Similarly, in instances where the research tracks the evolution of a particular zip code over time (either by following its subsequent employment trends or by comparing its distress score in the 2000 vintage and the 2016-2020 vintage), matches are made based on codes alone; underlying and unobserved changes may have been made to boundaries.